The poleaxe and halberd are both ominous-looking weapons used by knights and soldiers on battlefields. Highly versatile and effective for defense and attack, they maintained their relevancy for decades, even after gunpowder was invented.

Although some people think poleaxes and halberds are the same things, they have unique features which set them apart. This guide will explain the differences between a poleaxe and a halberd so that you never get them mixed up.

What’s the difference between a poleaxe and a halberd?

The poleaxe and halberd are both pole weapons with pointed spikes on the tip and extra features like an axe or hammer near the end. Halberds usually had larger axe blades and a longer handle, ideal for mass defending mounted attacks. Poleaxes were shorter and easier to maneuver, suitable for one-on-one combat, with both ends being used to fight.

What is a poleaxe?

The poleaxe or pollaxe is a European weapon used in medieval times. It had a handle that is roughly 4-5 feet with a spike (fluke) at the tip. It also had a hammer face opposite the blade, a pick, and an axe.

Poleaxes were primarily percussive weapons, designed to crush the opposition with blows. However, its axe blade was ideal for slashing and hacking into an unsuspecting victim. The tip was used for stabbing through thin armor or finding gaps in plate armor.

Many poleaxes had had dagger-shaped blades that faced down the handle. These were used as a hooking device to pull cavalry from their horses or sweep and trip enemy on foot.

Strengths: Agile and versatile, serious defense against soldiers or cavalry.

Weaknesses: Difficult to deliver knock-out blows with one hit compared to other weapons like a battle axe.

What is a halberd?

A halberd is a pole-arm weapon, invented back in the 14th century by the Swiss army. Like the poleaxe, it had a long pole with an axe, hook, and pike towards the top of the shaft. At the tip, there was usually a sharp spike.

Halberds came into use in the 15th century, are were primarily used to defend against mass cavalry charges. Their versatility and effectiveness meant they were still used in the American Revolution, even when modern weaponry was being used.

Strengths: Speed and accuracy, capable of piercing metal armor, a handy hook for pulling the enemy from their steed, longer shaft than a poleaxe.

Weaknesses: Ineffective for close combat, couldn’t use a shield at the same time.

The effectiveness of the halberd resulted in different parts of the world creating their own version of this weapon.

The original halberd originated from Switzerland and gave Swiss armies a fearsome reputation for creating carnage on the battlefield. The 3-year Burgundian Wars were famously ended by a peasant who killed the Duke of Burgundy with one thrust of the halberd.

Japanese halberds, or naginatas, were a popular weapon with the Japanese samurai, warrior monks, and foot soldiers. This variety of halberd was similar to a glaive, with a head made up of one forward-facing blade that has a curved profile. Although its design was different, Japanese soldiers used them in much the same way in battles.

The Chinese halberd, or ji, was a long shaft with a dagger at the end similar to a European halberd. There was also a blade attached at right angles to the shaft. Although no longer used in war, a safer version of the ji is still commonly used in Chinese martial arts.

A poleaxe was used by men-at-arms and knights who fought on foot. It was a versatile weapon that was used for thrusting attacks, hacking down an enemy, blocking blows, tripping, and disarming.

The halberd was trickier to maneuver as it was longer, so it wasn’t so ideal for close combat fighting. It was best used by mass groups who formed a line of difficult to penetrate spears. Halberds were especially good at warding off cavalry.

Was the poleaxe an effective weapon during battle?

The poleaxe was a highly effective weapon for one-on-one battle, regardless of the style of armor worn by the opponent. It could compete with other weapons like swords, maces, or battle axes.

Glaive vs. halberd – which is best?

While a halberd has an axe on a long shaft, a glaive uses a sword attached to the end of a shaft. A glaive was lighter and nimbler for thrusting but lacked the power of a halberd.

How to hatchets and tomahawks compare?
Check out the history of axes.

The halberd and poleaxe were both intimidating pole weapons, responsible for causing carnage and winning wars. Having various components on the one shaft offered soldiers a range of different attacking and defensive strategies.

The halberd had a longer handle and a bigger blade, making them ideal for fending off mounted attacks. When the going got tough, even peasants were armed with a halberd and added to the defensive lines.

Poleaxes had less reach, making them better suited to one-on-one combat. They were lighter and easier to swing, thrust, and block with.

Choosing the best weapon out of a halberd and poleaxe would be near impossible. Both weapons were highly effective in their own domain. On frontline defense, you’d be more comfortable with a halberd, but once the fight turned into a melee situation, a poleaxe was a better choice.

Big mauls and splitting axes easily power through logs and stubborn wood. But they cost more, and some find them cumbersome to use. That’s where…

Reviewed by: Alex Johansen. Modeled by: Angel. Heavy-hitting axes are ideal for powering through tough logs but they have limitations. Carrying them to a campsite…

Reviewed by: Alex Johansen. Modeled by: Angel & Zaza. Full-size axes help fell trees and split big logs, but they have drawbacks like weight and… 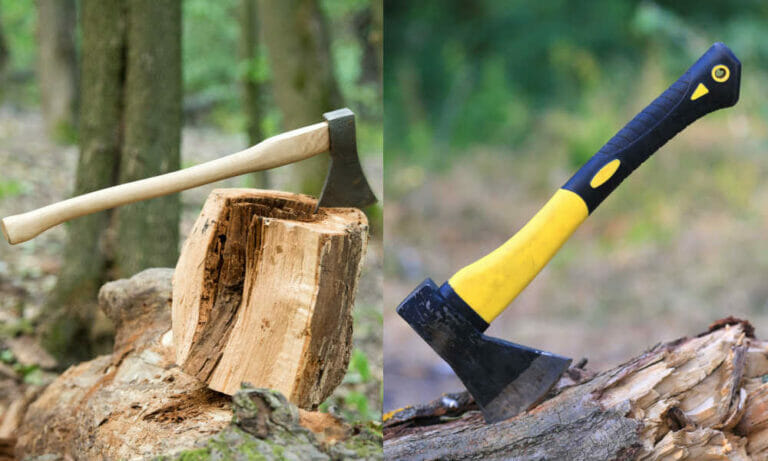 Hatchets and axes are similar handheld tools, but they’re not the same. Each has its strengths and weaknesses and deciding which is best will depend…

The Fiskars X27 Splitting Axe is the biggest option in the X-Series, geared towards bigger jobs. Whether you’re splitting big stumps or have a lot…

Large splitting axes and mauls are beasts for powering through big logs and stubborn wood. But they cost more and are overkill for many jobs….