The maple is a diverse type of deciduous tree that has over 100 species. Easily recognized by its leaves, it grows well in North Africa, Europe, and North America.

In this guide, we’ll look at whether maple makes good firewood and how it compares to other popular types of wood.

Keep in mind there are many varieties of maple, so you’ll get varying opinions on how it performs in the fire. Although maples are classified as hardwoods, there are hard and soft species that vary in density.

Is maple good for firewood?

Maple makes decent firewood that can be used for home heating or in barbecues and meat smokers. Although its heat output is relatively low compared to hardwoods like oak and black locust, it makes excellent coals and gives off a pleasant aroma. Use maple as shoulder season wood or in climates where temperatures don’t drop too low.

Heat output is an important consideration when you evaluate firewood. It needs to give off decent warmth, whether you’re at home or sitting around a campfire.

The heat provided by maple varies depending on its density. In general, the harder the wood, the higher the heat.

If you live in a very cold climate and don’t have a dense type of maple, you may want to combine it with another hotter-burning wood. Keep in mind there are many factors to consider – if your home is well insulated, then any maple will still do the job. You could also use soft maple in the shoulder seasons when lots of heat isn’t required.

Check out the following table comparing the heat output of maple to various other common types of firewood.

Smoky firewood isn’t ideal if you’re burning it indoors on an open fire. No one wants red, sore eyes from too much smoke floating through the house.

Seasoned maple burns clean, giving off very little smoke. Whether you’re relaxing in the comfort of your own home or sitting huddled around a campfire, smoke shouldn’t be an issue.

Although most maple firewood won’t produce smoke, sugar maple is known to get a bit smoky. If you’re after quality wood without smoke, hickory and oak are both good options.

Firewood should be properly seasoned before burning it. Green wood from the maple tree is high in water content and will billow out smoke if it’s tossed into the fire.

Unseasoned maple is also much less efficient for burning. The fire uses all its energy to evaporate water rather than providing heat.

If you’re heading out camping, be sure to check out our advice on the best firewood for campfires.

Softer varieties of maple are easy to split. You’re best to process the wood while it’s green, thanks to the moisture content. Once maple dries out, it hardens and becomes less yielding.

You can make splitting the wood easier by investing in a splitting axe or maul that’s right for the job. If you’re struggling to split the wood, look for fine hairline cracks which are the weak spot of maple.

One section of the maple that’s especially difficult to split is the crotch of the tree. An area where multiple limbs join, creating knotted, gnarly wood. You’re best to skip chopping this wood by hand; instead, use a hydraulic splitter.

Some wood will pop and spark, which isn’t great if you’re trying to relax and watch your favorite television show. If you have an open fire the embers could burn the carpet or cause an unwanted fire.

Maple produces few sparks, so you’re able to get the fire started, then relax. If you’re in the outdoors then you can never be too careful. Avoid leaving a burning fire unattended even if it doesn’t spark – it can be unpredictable.

Maple gives off a pleasant campfire aroma as it burns in the fire. It has a sweet smell that is known to linger in the house for days.

Barbecue enthusiasts, meat smokers, and anyone who enjoys cooking with firewood will enjoy maple. The smoke adds a slightly sweet, subtle taste to food that most enjoy. It is ideal for cooking poultry or pork, and if you’ve got sugar maple then it’s hard to beat smoking turkey.

If fragrance is important, then you may also want to check out our review of hickory firewood which is revered for its smell. You can also read our apple firewood review for a wood that gives off a more subtle aroma.

Firewood that produces good coals will impact how the fire burns and how long it will last.

Maple is a type of hardwood and is one of the best options for coaling. You can throw a log in the fire and it will put out heat all night.

Re-starting the fire in the morning is easy thanks to the embers that’ll often still be glowing.

The smoke from a fire deposits a tar-like substance called creosote on the inside of the chimney. Left long enough, it will begin to block the chimney, so it’s important to regularly remove it.

All wood produces creosote, but thankfully maple doesn’t produce the stuff in large quantities. Being a hardwood, maple doesn’t have a lot of sap and resin like pine firewood, so it’ll burn clean.

How does elm perform in the fire?
How much wood in a cord?
Is alder good firewood?
Is walnut firewood worth burning?

How long does it take to season maple firewood?

Softer varieties like red maple and silver maple will require around 12 months of seasoning time. Sugar maple is much denser and will benefit from 2 years of seasoning.

Drying time can be reduced if you have an old maple tree that has been dead for years. It will have already dried out so you may only need to season the wood for 6 months.

To speed up maple firewood seasoning, a hot and dry climate will help. As that isn’t possible for everyone, it’s easy to accelerate the drying time with these tips:

When is the best time to fell a maple for firewood?

Try to fell maple trees and split them between winter and early spring. During this cold time of the year, there is less moisture content and sap, so the wood seasons quicker.

How long does a cord of maple last?

How long maple lasts will vary based on the fire you’re using, the climate, and how well the wood is seasoned. Expect one cord to last around 8-10 weeks.

How do I identify a maple tree?

The best way to identify a maple tree is by its green, lobed leaves that turn red, yellow, orange, and dark burgundy in the fall. You’ll also notice that maples have brownish-red twigs and furrowed dark brown bark.

How do I identify maple firewood?

Maple wood can be identified by its end grain which doesn’t have rays running from the center to the outside, perpendicular to the annual rings. The wood is often white with some reddish-brown hues.

Maple firewood is good all-around firewood that doesn’t have any glaring weaknesses. Although it won’t compete with the best firewood varieties on heat output, it still has excellent coaling properties, low spars, and smoke, and smells pleasant when burning.

If you want a hotter burning wood, then hickory, black locust, or Osage orange will be a better option. For everyone else, maple is useful firewood that is well worth the effort to split and stack for winter. 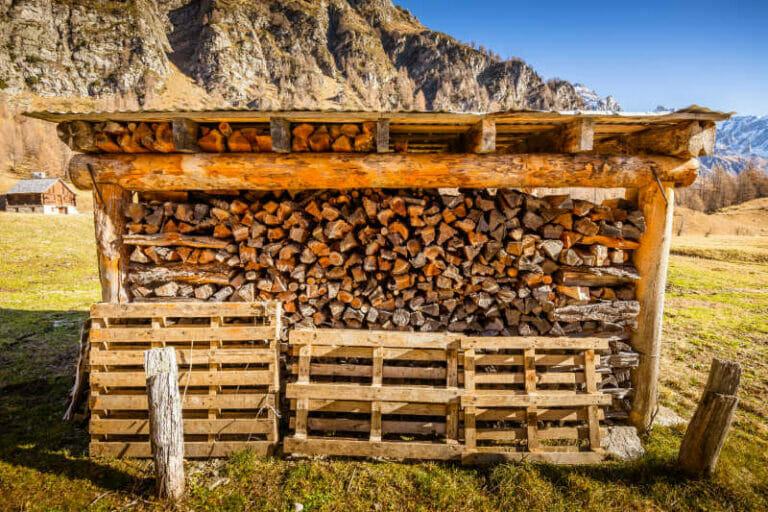 The tamarack is a deciduous tree that grows in cool, temperate regions. Also known as larch, this conifer thrives near lakes, swamps, and streams and… 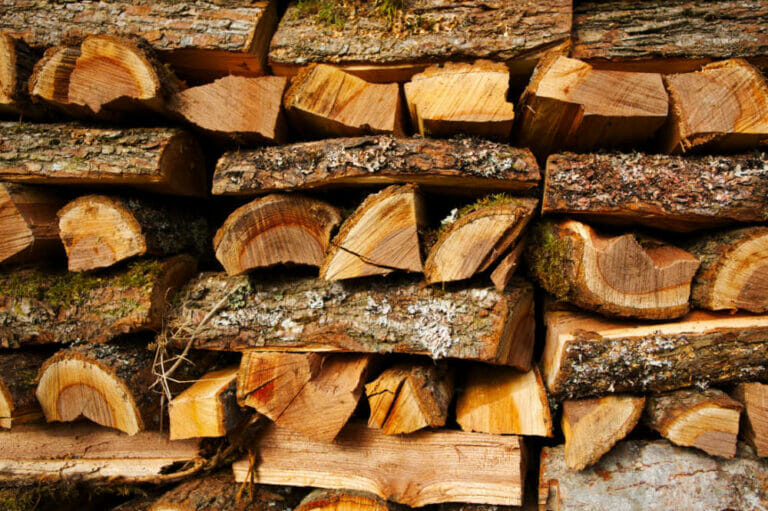 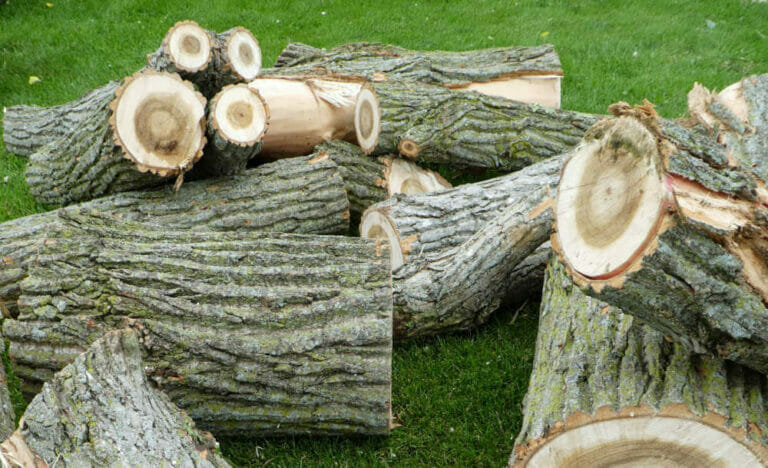 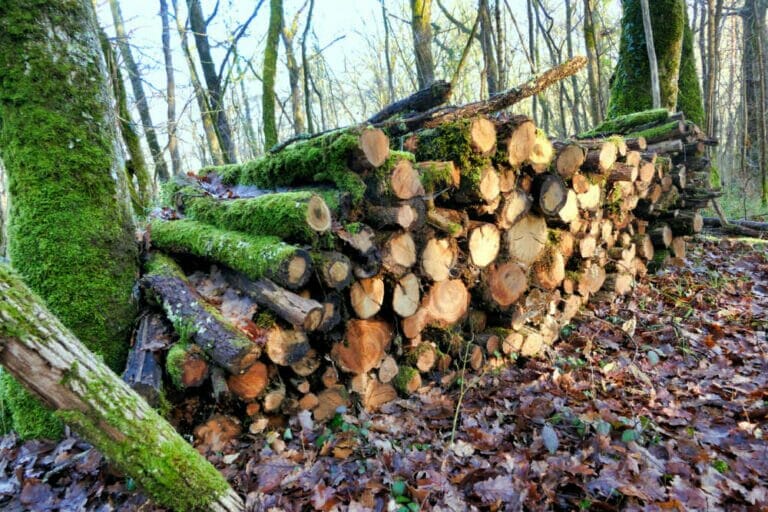 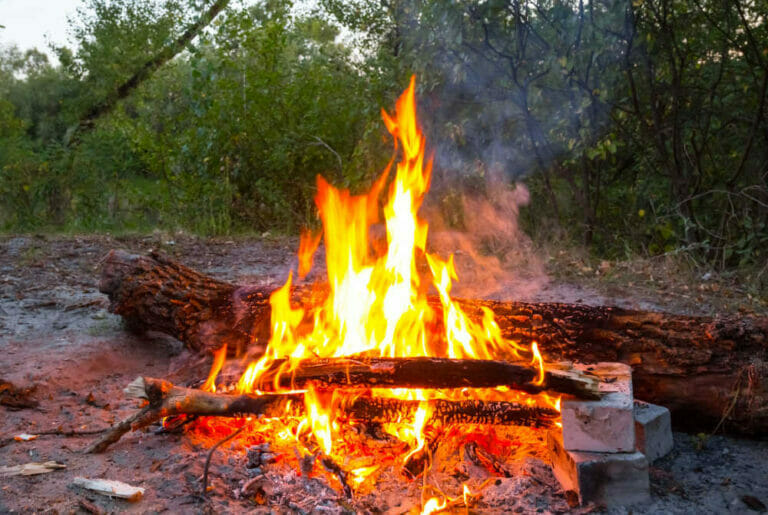 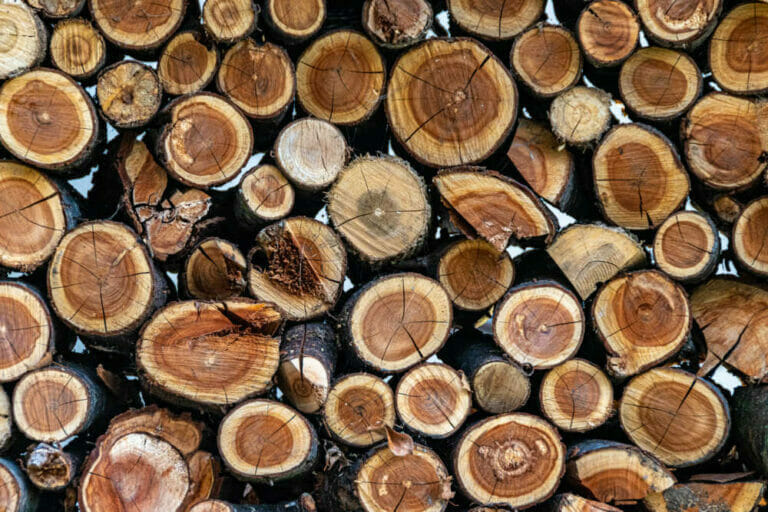